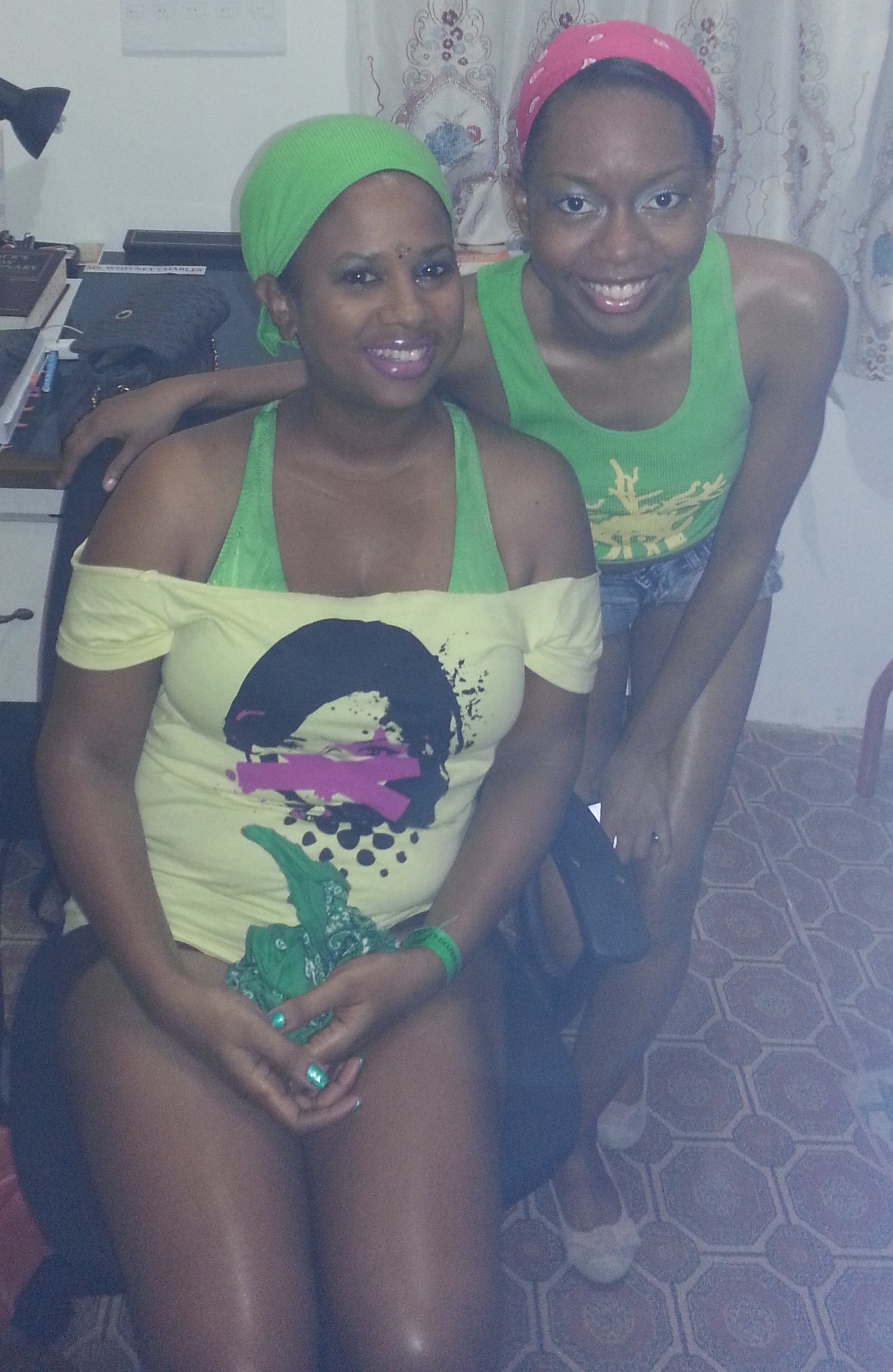 You’ll learn why we’re covered in baby oil below. You’ll need it. Maybe.

J’ouvert is the road march before the road march. It happens on Carnival Sunday (or Monday, really) at the break of dawn the day before the actual road march. It’s dirty. Paint, powder and all manner of tings get thrown on you by party-goers. That explains our tee and tank attire here and why my head is all covered up. So now I get why road march is called pretty mas. 🙂

Earlier on Carnival Sunday, as I mentioned in my last Carnival entry, we were rained out and didn’t get to enjoy Trinidad’s Maracas Beach as I was hoping to.We still swung by and got a bake and shark cause I couldn’t go to Trinidad and not have one! It was soo good too, I need one right now…

Anyway we got home and decided to rest up for J’ouvert. J’ourvert is Sunday night in the wee hours right before Carnival Monday.

Now, this is where the real carnival experience begins. In Jamaica, J’ouvert is more about the party, with big-name headliners and nuff feteing at the venue. Then we go out on the road for a little bit but that is after everybody done tired and wuk up dem waist.

Trinidad on the other hand barely has a warm-up party, it’s all about di road! We got to the pre-party about 3 or 3:30am as we were set for the road at 4am. At the pre-party there were only serving punchy-punch aka puncheon (Rum Punch).

I’m generally afraid of anything called punch. I need to know what’s in my drink. I had good reason too. I think this was the first times I was feeling a buzz in Trinidad. They were extremely light handed with the Johnny Walker at the fetes but for some reason the punch was heavy! 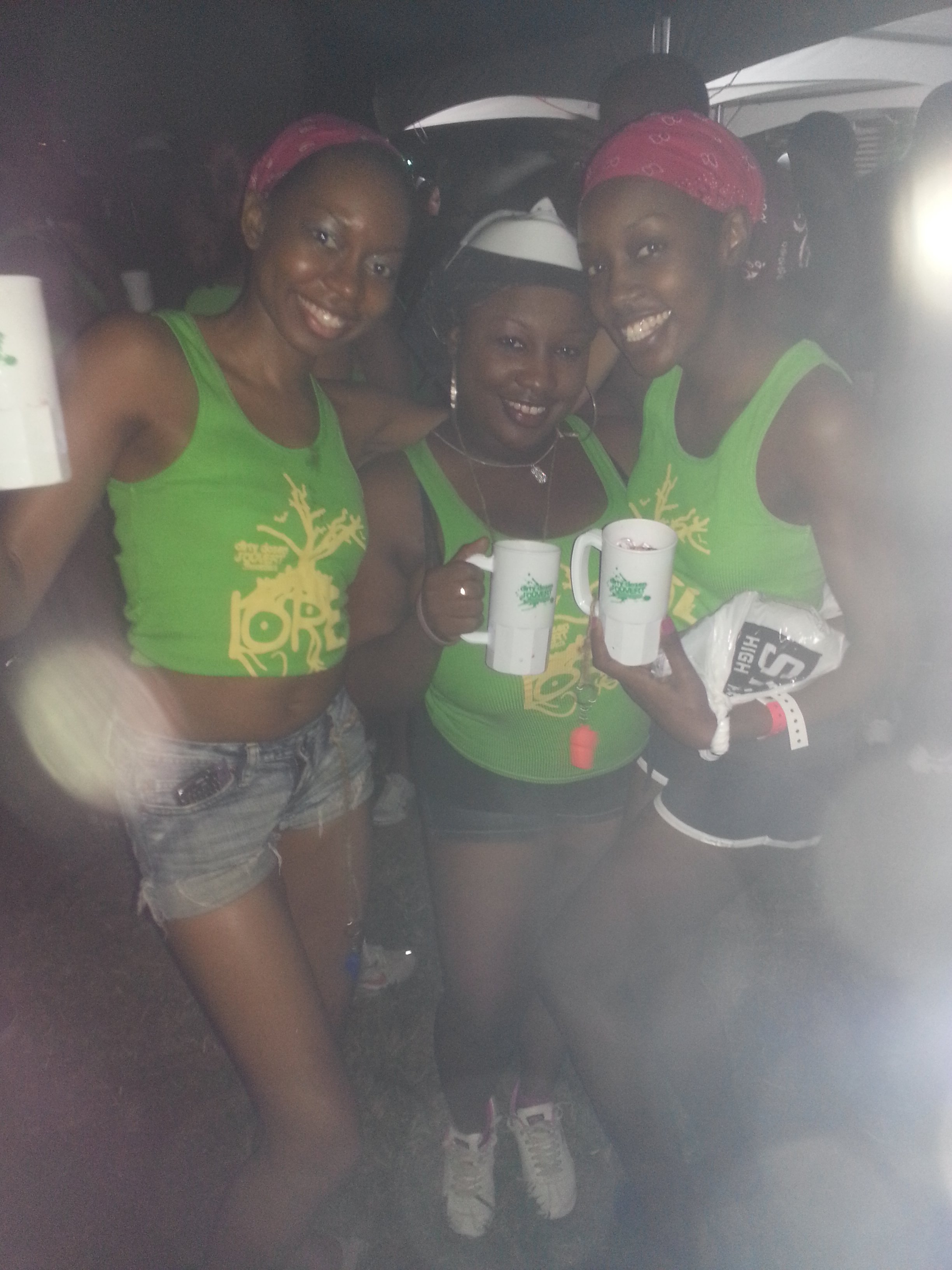 I’d gotten a waterproof case and strap for my phone so that I could capture images along the way. That’s why this pic looks like this cause paint and powdah was already in the air. Punchy-punched and ready, we headed out on the road in the crowd a people sometime after 4am. Not before the paint came out, of course 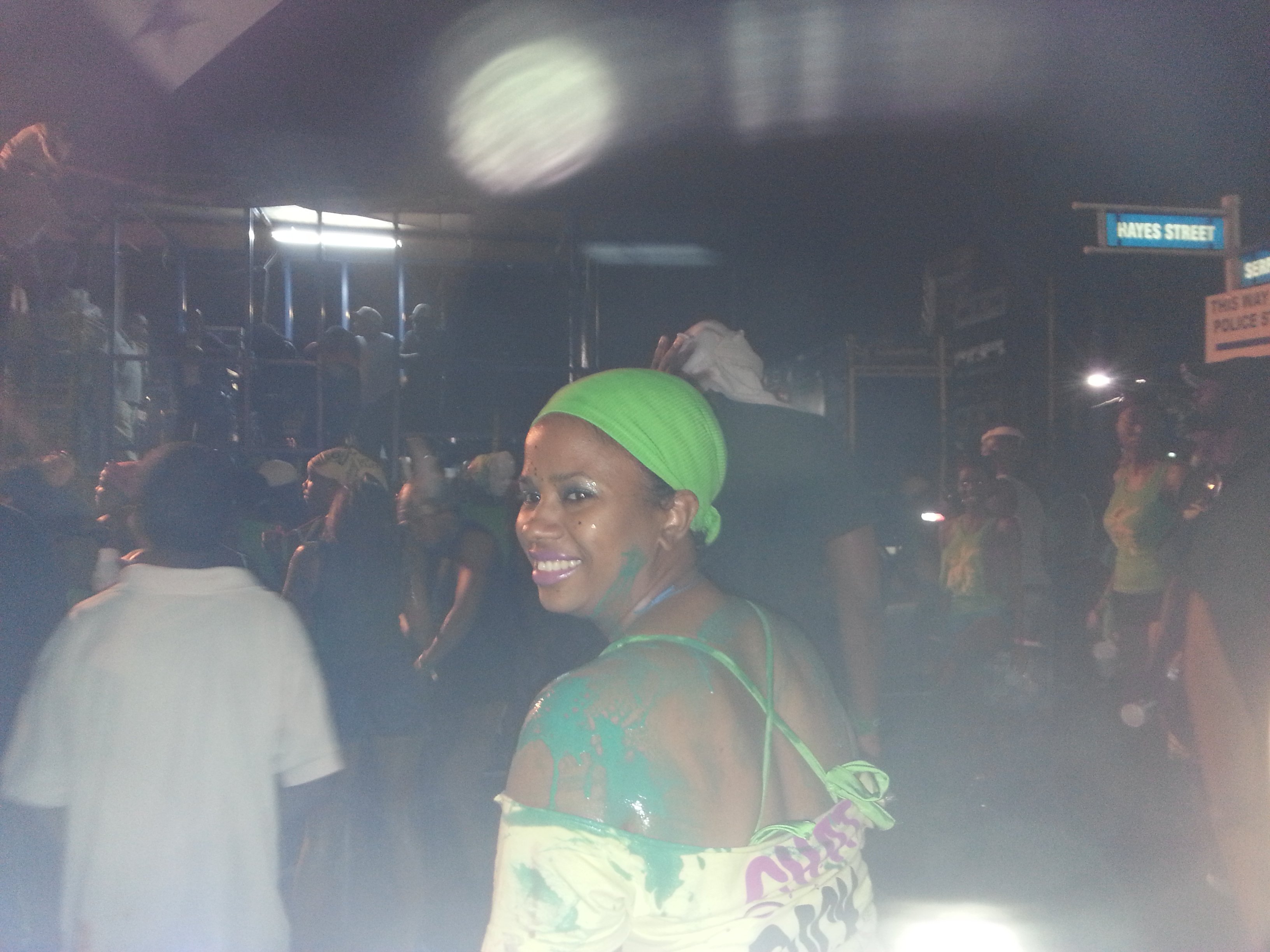 The road was loads of fun! Cute guys and nuff whinin and wukin up! I believe we simply went around a block and I did well buss rasta! (I was super tired)

I was already questioning my ability to do di road on carnival morning. Somewhere on the “hip strip” we met up with another J’ouvert band and mellowed out for a bit. Then, right when it got to around this time of morning: 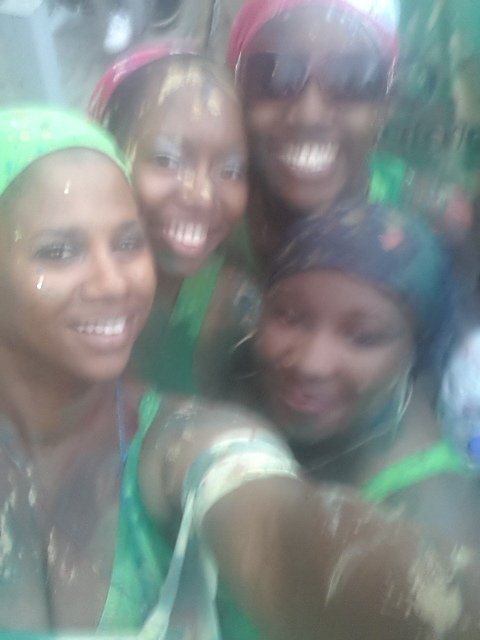 Is when things simultaneously picked up and popped down for me. I gave up drinking anything (even water) so I could save on finding lady-like places to pee. (don’t even ask) The music was chumping, the powdah was foggin’ (Thanks Machel, we really needed another substance to add to the paint -__-) and the vibes did nice! 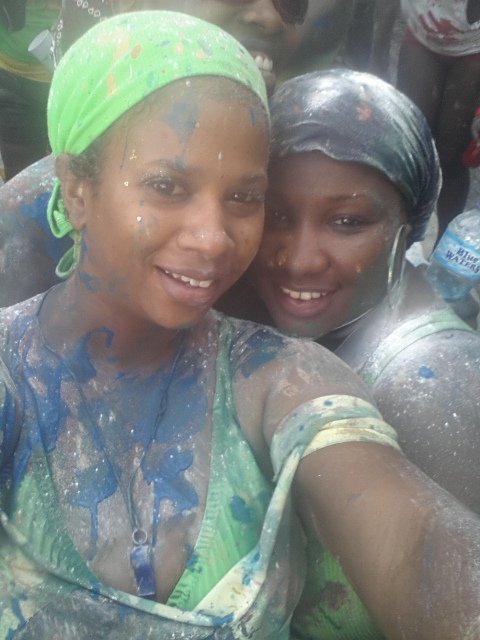 By the time the sun finally came out, I had finally had enough and just wanted to go home. The paint truck seemed to be never-ending and of course the powdah.

At this point, you’ve been wet for so damn long, but yet because of the sun you’re kinda half dry so water is the last thing you want to see. I wanted food, shower, bed. In that order. And the baby oil thing?

So we baby-oiled down ourselves so that the paint could wash off easily the next day. In theory, sounded like a good plan. It’s advice we got from the Trinis, after all.

All for naught cause I was in that shower for about 30 minutes just scrubbing and I still came out with paint on me. Every time I get this messy at j’ouvert I swear never again. SMH

I love j’ouvert, though I think I could do without the paint. I like the concept of road march, without the sun. Can we just wear our costumes at night?

Or maybe at 5am right before the sun comes out? We’ll just do a quick lap around the savannah then go to the beach? No? Ok… 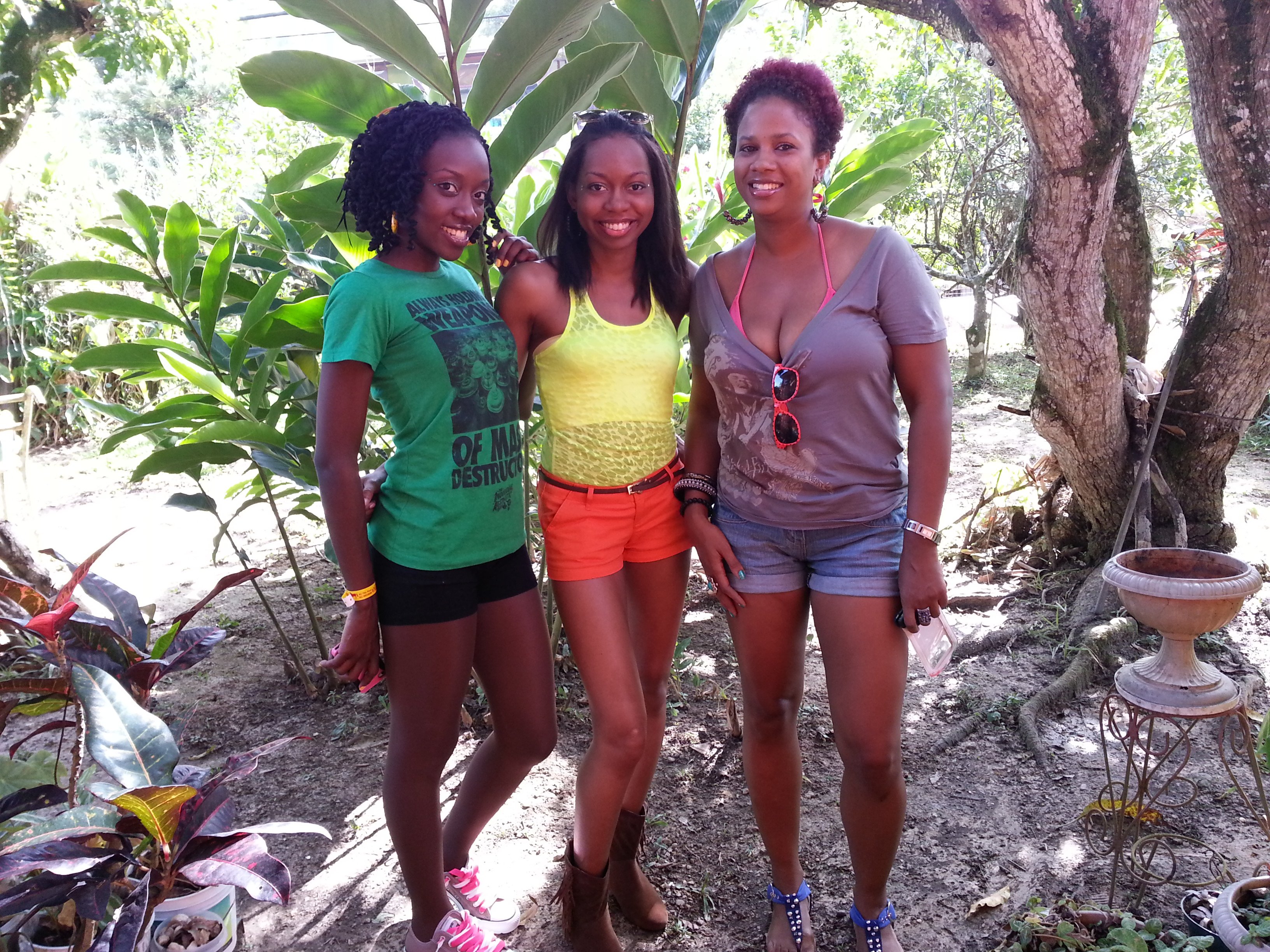 So Trinidad has Carnival Monday and Carnival Tuesday. You’re supposed to leave j’ouvert, go take a quick nap and be back out on the road chippin early Carnival Monday. Eh… not in this universe.

We got back on the road around 4ish, right when the sun was beginning to cool. 😀 We decided to chip alongside the Tribe band for Carnival Monday. One of my favourite things about being on the sidelines for Trinidad Carnival was the opportunity to experience all the vendors lining the route.

As a reveller, you’re pretty much catered to by the band’s music truck. Walking along on the outskirts means you have to get your food and drink from the vendors who you pass on the road.

Loads and loads of vendors set up to sell you everything from Trinidad’s famous doubles, corn soup and gyros plus all the drinks you could want. There will also be a lot of snow cone vendors cause hunny the sun!

As far as the Trinidad carnival costumes and all around experience, Tribe is the most prestigious band of Carnival in Trinidad. It’s the carnival band that’s most expensive but comes with the most perks. The one with the most tourists and ooooo eye candy. I was having fun.

They really do sell you the experience and surely succeeded in making me feel like if I buy a costume next year, it will be Tribe. Their costumes weren’t even the best but I like that their route is shorter and I like all the perks you seem to get just being in their band.

Not that I know what you get with another band, say an Island People. I think that band is worth the research as well because it was pretty and pretty popular. But Tribe was very nicely packaged.

On Carnival Monday, people mostly were out in costumes of years gone by or in tube tops and other Monday wear given to them by their band.

I agree with one article I read in the Guardian, some bands should cross the stage on Carnival Monday. This helps to reduce the Carnival Tuesday traffic, plus gives us onlookers something pretty to look at on a Monday.

Who wants to see revelers in tubes? But I’m just a carnival newbie. Stay tuned for my final carnival post, carnival Tuesday!

Have you ever been to Carnival in Trinidad? What’s your experience been like? I’d love to her in the comments below!